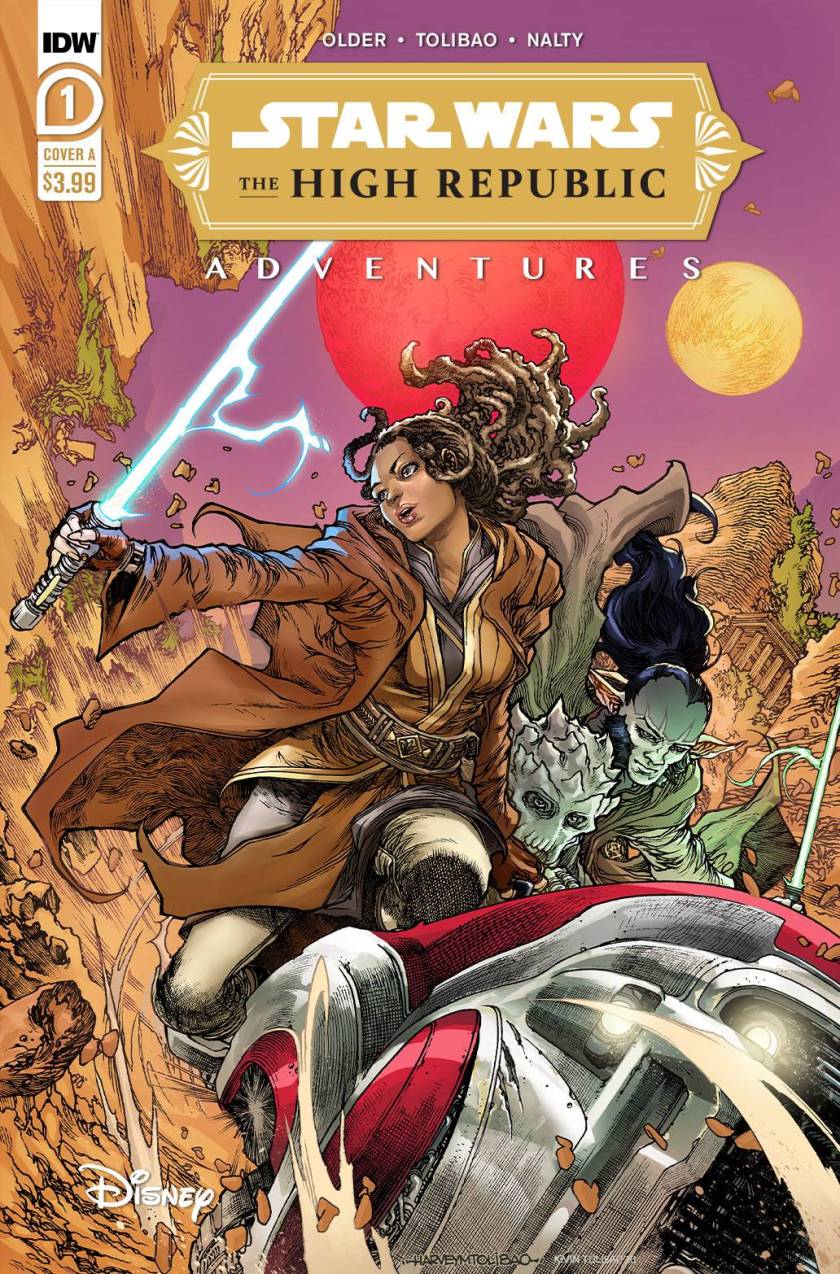 There are so much High Republic stuff it is hard to keep up 😅 This will be a quick review since it is barely the first issue and there was not THAT much that happened, but it did set up the story very well.

The artwork in this comic is fantastic as well! It does not look childish, it is extremely realistic. And great enough to where if they ever made these into an animation it would transition over seamlessly. Writing in this comic is also great. It is only the first comic and I am already invested in all the characters.

Overall I enjoyed this first issue very much. I love when we learn about adventures that the Jedi go one. That’s why I LOVED the Clone Wars TV series and the Rebels TV series so much. I loved to see all the adventures Obi-Wan, Anakin, and Ahsoka went on. So I am excited to see where this goes.

If your local comic shop doesn’t have it then you can always buy it on Amazon. Click on this image of the comic and you can buy it from Amazon for $1.99.

We are in the Republic Security Zone. Monitoring Satellite. 777B-Alpha. Trymant System.

A character, whose race is Dug, like Sebulba, is out checking different sectors. He says all the sectors are fine until he comes across sector 19. When they get here it looks like some sort of hole as been opened and a lot of debris is falling out. They alert Starlight (Starlight Beacon is a new Republic space station from the book and other comics).

We jump to the Star Hopper, which is a Padawan Academic Cruiser. A Padawan by the name of Lula Talisola, is talking to herself. She says that she is trained her whole life to become the greatest Jedi and she this is her first mission with her friends Qort and Farzala. Yoda is here too! She says she does not feel the force or anything. All she can feel is that this mission is going to go wrong. They get a message from Starlight asking them to go to the Trymant System.

Next we go to Bralanak City Trymant IV. We come across a female creature named Zeen Mrala, she also has a secret. She says her whole life her elders have taught her best friend Krik and her to be aware of the Force. But the Force should not be used, just respected. The thing is she feels the Force inside her, but she is scared of it and wants to shut it out and tell no one, not even Krix will know.

Back with Yoda and the Padawan’s they are trying to figure out what is happening in the Trymant System. They think what happened was a delayed fallout reaction from the hyperspace disaster at Hetzal. Also, the debris is on track to hit the city of Bralanak City. Bralanak City is the most densely populated planet in the system. Master Yoda and Master Torban Buck will take care of the falling debris when they come out of hyperspace and the Padawan’s will go to the rescue speeders. Lula again is talking to herself saying that her being calm in this situation is all a mask and that one day she will be good just like Yoda and Torban. Yoda makes sure to tell the Padawan’s to always move WITH the Force, never against it.

Zeen talks to herself saying she can feel when something bad is happening. She says it feels like a tingling sensation, but she tries to ignore it because like the elders say, to not use the Force. Her and Krix see something coming from the atmosphere. This spider ship things comes out of the air. Krix and Zeen find out that it is the elders. The Elders tell them that the evacuation isn’t for them and they say good luck with the apocalypse. Zeen says that Trymant IV is the safest she has ever felt. her whole life she has been constantly moving, until she came to Trymant IV.

All the Padawan’s have landed and are trying to save as many people as they can. They approach the elders because they want to use their ship to get everyone off Trymant IV. The Eldars and Zeen are shocked to see Jedi.

Zeen says to herself that she wants to be like the Jedi and help people. Lula and Zeen talk to themselves, but they are in unison. They say that when they feel destruction happening they also feel the Force rising in them and they want to rise with it. Zeen starts to help the Jedi and hold back debris.

The elders take Krix to save him. Krix is extremely mad at Zeen because she is a Force wielder. The elders surround the Jedi and say that they want to kill the Jedi.