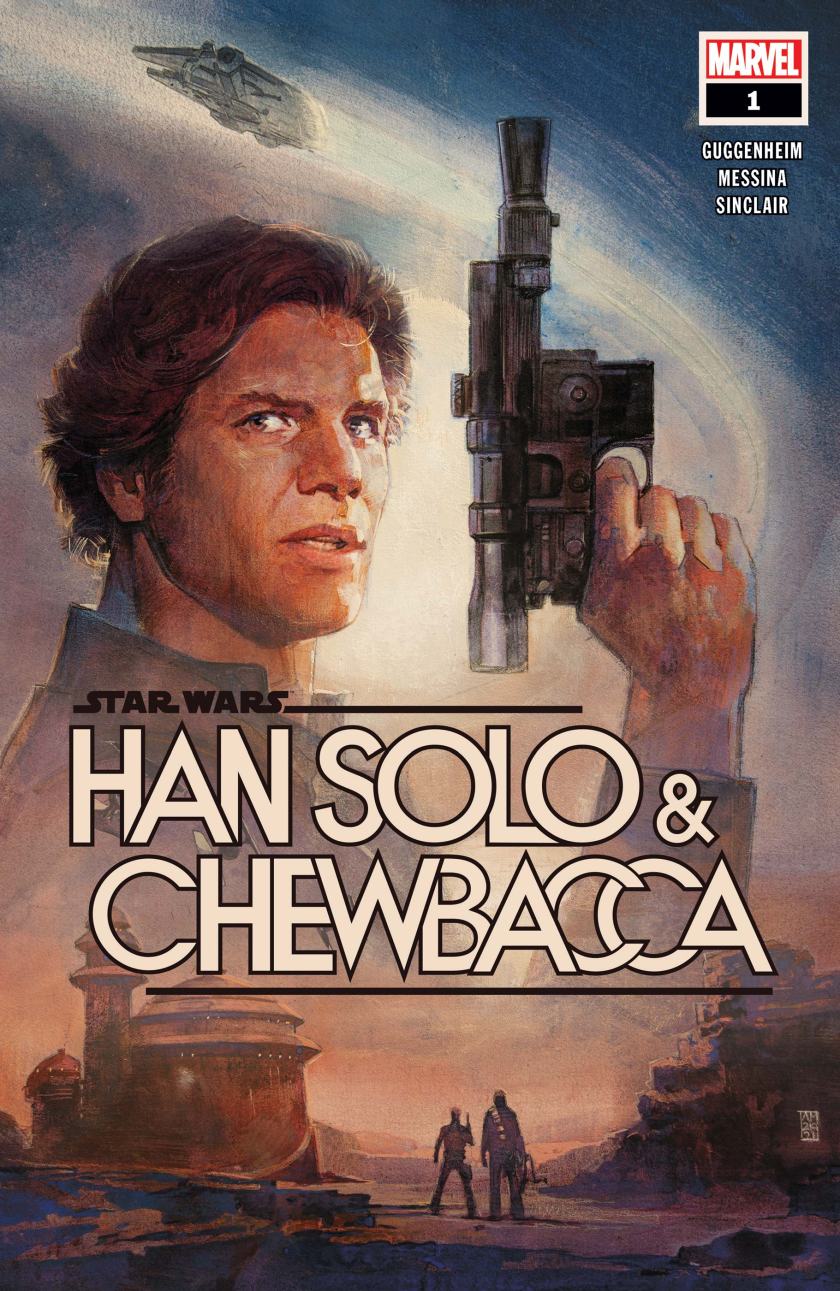 Business has been good, but Han and Chewbacca are always looking ahead to the next job and the payday that will score them more wealth than they can imagine. . .

Han Solo and Chewbacca are the best! Any new stories about them before they met up with Leia and Luke are so much fun to read about. I am a huge fan of new adventures and getting deeper into why a character is the way they are. With Han I like to see everything he was up to and his character before he runs into his love, Leia. And anything with Chewie I am game because even though he is a main character, they still leave him in the background.

Honestly, I was already invested from the start of the comic. I am a sucker for Han and Chewie stories. I love adventure stories and I know this is FOR SURE going to scratch that itch. Guggenheim does an awesome job at keeping enough information from us to keep me interested. Especially in the final scene. . . Oh man. . . But yeah, Guggenheim is holding their cards close to their chest and I am ok with that. Others hold them too close and will give zero information and not give enough information. I still know what is happening, but I will still be shocked with what comes next.

Messina and Sinclair got me from the very beginning. I am loving the color palette and I love that the drawing is not that realistic. Like you can obviously tell who these characters are, but it is not as detailed as other comics. Nothing against realistic comics, but sometimes it is nice to know that this is the fun way someone likes to draw a particular character. There is a two panel page where we see the Falcon an man, it looks FANTASTIC. The whole thing is pleasing to the eyes. The color palette to this is beautiful. Even though it is not full of bright colors, it works. It is more on the darker side, but not so much to where you cannot see what is goin on in the panels. I can’t wait to see what the other comics look like!

I can already tell that I am going to love this comic series. I really hope my love for this stays this high.

It is a golden age of criminal enterprise. With the evil Galactic Empire preoccupied with bringing the galaxy under its thumb, scoundrels and thieves are free to ply their criminal trades with abandon.

For the past several years, HAN SOLO and CHEWBACCA THE WOOKIE have been scamming, smuggling, and thieving for the vile gangster JABBA THE HUTT.

Business has been good, but Han and Chewbacca are always looking ahead to the next job and the payday that will score them more wealth than they can imagine. . .

The Casino Planet of Galator lll. Han and Chewie are on a job and the rest of his group is getting fired at outside on the roof of the Casino. Khel Tanna radios Han asking where they are because they were not at the rendezvous point.

They all head back to Tatooine to give Jabba his money. Jabba then gives Han and Chewie a new task. He wants them to do a Crystal Run. Jabba wants the urn of Pure Verillix. The urn holds the ashes of Jabba’s most hated rival, Krestrel D’Naran. Jabba offers 1 million credits to split with him and Greedo. Han is upset about this and pulls Greedo to the side and talk to him. He says, “If you try to screw me over, double-cross me, do anything that gives me a bad feeling I’ll shoot first and ask questions later.”

Corellia. Han is not happy at all to be back home because he vowed to himself that he would never come back, but money talks. Greedo says this planet smells and Han agrees. He said that he grew up on the streets and scamming people. Chewie asks him if he wants to run into Lady Proxima. Greedo takes them to the “Nice part of town” and Han wants to know which wealthy person are they going to be stealing from.

Mos Eisley Spaceport, Tatooine. A guy named Vizam is talking to a hologram of a guy named Corbus and tells him about the job Han Solo is doing. Vizam wants the urn for himself because Jabba wants it.

Corellia, Pearl District, Home of Corellia’s Wealthy. Greedo says they are steeling from a guy named Agustus Graves who works for Corellian Engineering Corporation. Han knows who this is because his dad used to build YT-1300s for them. Han sees Graves walk out of his penthouse and he runs into him to pickpocket him. He needs to see his apartment because Greedo mentions there is a safe and that is where the urn is.

Han finds the safe and tells Greedo that it is a “Locris 1-42-08, the most impregnable safe in the galaxy”. While having a drink at the bar a man bumps into Han. He sees this man works where his dad used to and buys this guy a drink. The guys asks Han what was his dad’s name and he says “Ovan”. The guy he is drinking with says “No. It can’t be. . . Han? . . . I’ve found you, boy”.

Club Silhouette, Hosnian Prime. A Corpo Lawmen, a Marshall named Buck Vancto, asks the bartender for some information. They are looking for Brox Anthar. While Buck is arresting Brox for grand larceny, they get a phone call with another job. Buck is shown an image of Han.