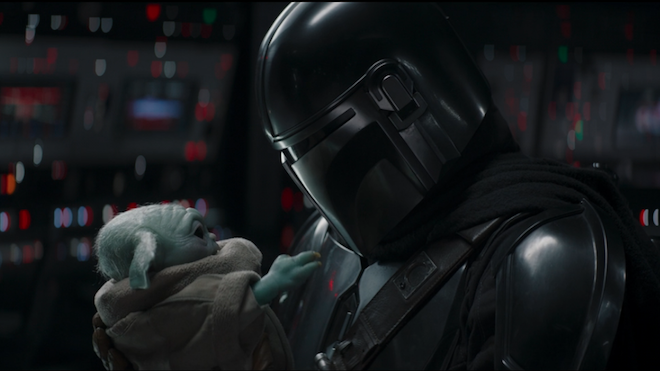 It’s a sad time for all of us. . . . Season finale of Mandalorian

Bo Katan – Seeing Bo talk to Fett was intense! After she told him, “your donor” I was like “oooo”. To me it felt like I was watching The Sandlot when Porter and Philips are talking trash to each other. When she said “I have heard your voice thousands of times” I was like oof man. I was wondering how it was all going to go down when Fett and Katan met.

Mando – Ohhhhh myyyyy gooosh! Pedro Pascal had me tearing up at the end there. More about that in a little. . . . Whoever is the stunt person for Pedro is bloody FANTASTIC! That guy really knows what he is doing. I loved that little heel kick thing he did with the Beskar spear when he was fighting Moff. ALSO when he choked the Storm Trooper to death was pretty rad. What was funny to me is that when Mando stuck his Beskar spear into the Dark Trooper I acted the same way I would when a real person gets shot or stabbed like from Bourne Identity or John Wick. So it made me laugh because the Dark Troopers are just droids.

Baby Yoda – Seeing this little guy leave with Luke was so bittersweet. Bitter because he is leaving us and Mando, but sweet because Grogu will get the training he needs. The part that got me though is when he is saying bye to Mando. When he put his hand on his helmet I KNEW what was coming next. I knew that Baby Grogu would want to see and touch his actual face. When Mando took off his helmet you can really see Baby Grogu taking in Mandos face. I am sad that Baby Yoda is gone, but it makes sense that he had to if they want the Mandalorian story to grow. As much as I love Baby Yoda he was, for lack of a better phrase, in the way. Mando always had to try to find a place for him or find someone who could watch him. Mando was always worried about his safety. So to me it is a lot easier to give up Baby Yoda and we can just meet up with him later in the series when he is a little older and then he can help out Mando.

The puppeteers for Grogu are nothing short of amazing.

Luke Skywalker – THIS IS THE LUKE SKYWALKER I HAVE BEEN WAITING FOR!!! Duuudes. Honestly. This is the Luke that I wanted in the sequel trilogy, but sadly this is not the Luke we got. I was hoping Luke would be the one to come get Grogu. You know I honestly had NO idea it was Luke until we got our first glimpse of him in his cloak. When Cara Dune said, “Oh great one X-Wing” I thought it was going to be another Filoni cameo. Once we got to see Luke in action I had a HUGE smile on my face. Luke was just so BA. The guy who was playing him I say kudos because he was just awesome. Then seeing look freaking CRUSH that Dark Trooper had me standing up out of my couch. Once Luke got into the elevator and the door opened to where our heroes were I thought for sure that was going to be the end of the episode. BUT THEN WE SEE HIS FACE! Oh my gosh I was freaking out. They did such a great job! Don’t get me wrong. If you stare closely at it I know there are some imperfections, but overall it was simply fantastic. The technology they have today is amazing.

R2D2 – IT WAS GREAT SEEING THIS LITTLE GUY! Besides Obi-Wan, Artooie (as Ahsoka would call him) is my favorite character. So it was nice seeing him. After we saw Luke come and destroy I was wondering if we would see R2. It was also fun seeing Baby Yoda react to him. Every child I have seen at conventions LOOOOVE R2. They are always running up to him (as am I) to take a photo. So to see sweet Baby Yoda do the same was cute to me. But seeing this also made me think maybe Baby Yoda knows him? It would kind of make sense because R2 was always with Anakin. So Baby Yoda could have seen him or at least heard about R2. What if R2 is the one who saved Baby Yoda??? I would have to rewatch Revenge of the Sith to see where R2 is at the time when Anakin turns to the dark side.

Boba Fett – I was super excited to see Fett and Fennec show up at Jabba’s Palace. I cannot wait to see what they do with both of these characters when they move to their own show. I really hope they venture more into the Star Wars underworld.

Cara Dune – She is becoming one of my top favorites in this show. She is so legit. I loved when she shot the guy, and just turned around pretty much saying no Fs given here. And when she said “Which one?” when they guy said he was on the Death Star had me rolling.

It was cool too learning that the tattoo on her cheek was for Alderaan.

Fennec – Man, Ming-Na Wen is freaking legit. She was such a great pick for Fennec. I will always be biased towards Wen because I LOVE Mulan! She was also great in the Agents of Shield TV show. Her being with Fett I know they are going to do great things together. So it will be great to see where that story will lead them.

Moff Gideon – Giancarlo Esposito is the man! He is an outstanding actor! Outstanding! He is FANTASTIC in everything he does. As always, every scene he is in he gives it his all. When Moff and Mando see each other in Baby Yoda’s cell, his acting was on point. When Moff told Mando that he could take Baby Yoda and leave I really believed him. Esposito really reeled me in, but I knew Moff and Mando had to fight. But still. Espo had me for a quick second.

Then when they are on the main deck Espo’s great acting comes out again. When Moff is telling Mando that Bo cannot take the weapon his acting gave me goosebumps. You could feel that his baiting was almost working on Bo. I felt like Bo was about to attack Mando when Moff said Bo would be a “pretender”.

But like I said. Giancarlo Esposito is ALWAYS on point with his acting.

Darksaber – One thing I did not understand in this episode was why Bo couldn’t take the Darksaber. From what I remember is that in Rebels Sabine gifted it to Bo and Bo gladly took it. So when Moff was telling Mando about how Bo HAS to win it I was scratching my head. Dave Filoni is the one who created Rebels so I thought for sure he would remember what he wrote in regards to the Darksaber. But I am sure Filoni has his reasons.

Slave 1 – I only have one thing to say about Slave 1. It was so dope seeing this ship rise above the Imperial ship that they were going to take over. I loved that we got to see it from the angle of the cockpit because that was such a great site to see. If I were those Imperial pilots I would be scared too.

Dark Troopers – Maaaaan these things were SICK! They were so eerie and creepy. The music that went with the Dark Troopers was on point though. When they came back flying in to fight the gang the line “They fly now” when C-3PO said it in The Rise of Skywalker popped into my head and made me laugh. Even though these guys were BA they were no match for the great Luke Skywalker.