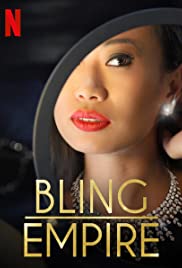 Oh my freaking goodness this show! I have no words. Honestly. Just. Freaking. Wow. The amounts of money these people have is RIDICULOUS. I am over here thinking Crazy Rich Asians is a fun, silly, rom com movie that would be cool if people lived like that. AND THEY DO! Right here in LA too! Crazy, just crazy.

I am over here hoping I will the lotto just so I can pay bills and they are out here having a Gucci claw machine for a baby’s first birthday! 😩

If you haven’t seen this show yet you NEED to! honestly. You need to. Just so you can see the crazy world that these people live in.

I CANNOT believe how rich these people are! For their Baby G’s 1st birthday they had a Gucci claw machine. GUCCI CLAW MACHINE! I honestly could not believe that. If you could only see my face. I do like that Christine and Gabriel give to charity. I really did like that.

Man, when she was talking about having another kid and her and her husband were crying I legit almost cried too. I am not part of their culture, but you can see the toll it takes on a woman to make sure they have children. It is crazy too that their culture does not care about medical stuff. That they will shun you if you cannot deliver a child. So I feel for Christine I really do and to see her husband stand by her and cry because he knows he messed up. . . Ugh. . . It was almost water works central!

It is cool that her and her husband are always donating to charity, but she CLOSED DOWN RODEO DRIVE. Closed it down! Man. The things you can do with money. 🤯

So Kevin is pretty much our tour guide to his friends and their lifestyle.

This guy I am not too sure of ok. He says he is broke, but I am not too sure that he is being honest with us. I think he knows what’s up, but for the show they make him pretend he doesn’t know what is going on.

He seems like cool people, but something about him is rubbing me the wrong way. I know I am feeling like that because I DO NOT believe that he is as broke as he claims. Do I believe that he does not know all of the mannerisms (For lack of a better term) that you need to have around the rich.

She is messed up and rude for throwing that. . . ahem. . . Intimate object through the window of Anna’s bathroom. It really was a rude thing to do. I also did not like how she tried to play it off like she didn’t do anything. It’s like what the heck dude?! We all just saw that. At the end of the day I am happy everyone made up and are friends again.

Besides her being ridiculous, she does seem like she would be fun to hang out with.

My heart did break for her when she found out that her biological father passed away. I don’t know what it feels like to try to find a parent because mine are still happily together. So when people say they feel a void I have no idea what that feels like, but I do know my heart breaks for people when they feel that way. I was reeaaallly hoping for a happy ending with Kim and her bio dad.

Kelly, Kelly, Kelly. She NEEDS to leave Andrew. I have no idea who he is. I know they said he is a Power Ranger, but I have no idea. The last Power Rangers I saw was when the Power Rangers went to space. Anyway, they need to break up, they really do. They are in a toxic relationship. For a man to get that mad that quick is crazy! CRAZY! Andrew definitely needs help from a professional because Kelly is not equipped with the skills needed.

I know Andrew’s whole thing is abandonment, but still. Kelly should not feel it is her responsibility. I understand it is probably hard to leave someone like that. That she will feel she is adding on to it, but that guy needs help. He needs to work on himself first before he can be in a relationship.

Personally I do not think this show is going to help Andrew’s career. If I were someone who was thinking of working with him and saw the way he treated his girlfriend I would definitely have second thoughts.

I know Kevin likes Kelly, but even them two being together I don’t see it. She needs a man who is going to challenge her, help her grow as a person, and give her romance.

I LOVE how this guy is in everyone’s business. He just keeps to himself and gets to enjoy everyone’s company. If I were around this scene I would be like Kane. You gotta be neutral to everyone and just show everyone respect. That way you won’t be in people’s drama and you get to be invited to everything.

When he took is friends bowling I was mind blown 🤯 I could not believe that he could just buy out the alley for him and his friends. I guess after watching this show I shouldn’t be surprised, but I still am.

HOW IS THAT A PROMISE RING?! That ring is freaking HUGE!

Charie is honestly my favorite next to Anna. She is so cute and so nice! I LOVED that she does not care about when is normal and asked Jessey to marry her. BUUUUT I do feel he should have been the one to do it. All those times she would bring up marriage, Jessey ALWAYS looked uncomfortable. And for a guy to be uncomfortable in that way is not a good sign. Jessey in his personal interview said that he wants to do whatever makes Charie happy. To me if that is true then why wouldn’t he propose to her?

At the end of the day I am happy for them both.

Side note. . . I CANNOT believe how much those soup ingredients were. Like WTF?

There is something about this lady that makes me all in. Sometimes I like her and then sometimes I don’t. I say I don’t only because I don’t know what she is really thinking. But, at the end of the day I FOR SURE want to be her friend. She does seem like she will be there for you as long as you don’t cross her. . . Christine!

I love to see her relationship with her French friend. It’s awesome to see that they are so close that she legit flies him out to CA just so they can hang out. CRAZY! That guy is lucky. His birthday party was legit too. Anna really goes all out for her friends.

I think she would be great to hang out with because she is enjoying life. She is doing whatever the heck she wants to do. And I LOVE that.

🟢Battle for the Title of Queen Bee🟢

Ok. So. Anna and Christine’s feud to me is hilarious. I feel this way because their fight is so different from other people’s drama. Their drama started because Christine wore a piece of high jewelry to Anna’s party. I guess that’s a huge no no? 🤷‍♂️ I am not sure because I do not live that lifestyle 😅 Because Christine does this, then Anna moves her nameplate for dinner to sit at the very end and does not get the same gift as everyone else 😂

It’s all honestly like WHAT? Haha, but I am all for it. It is mind blowing to see the difference in drama situations when you have money.  Her fight with Anna is just insanity to me. I just don’t understand rich people fights.

Right now to me Anna is Queen Bee.