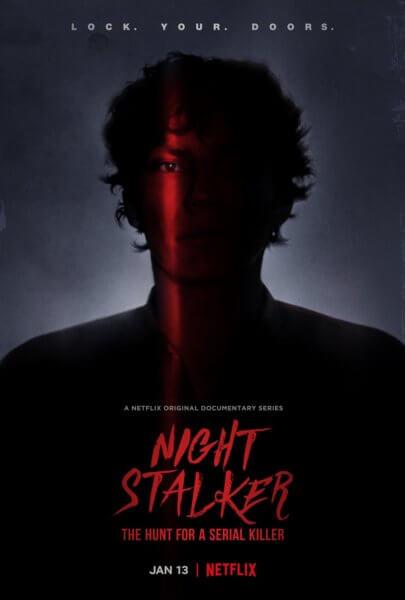 I LOVE hearing and reading about serial killers. Even other killers I like to learn about. ID channel is pretty much always on in the background. I also listen to podcasts too. People close to me say it is a weird obsession, but all I do is tell them they should be scared because I’m learning things 😈

Beneath the sunlit glamour of 1985 LA lurks a relentlessly evil serial killer. In this true-crime story, two detectives won’t rest until they catch him.

It was great to hear from the people who actually worked on the case, as well as survivors. Since I have read so many different stories and watched specials, I will be honest, I forget that these are real people. You read so much to where the stories of these people become just that. Stories. So it is nice to get a slap in the face where it’s like, these are real people who survived a serial killer. Although I do wish that the questions dug a little deeper. If felt more like they were reciting a Wikipedia page. I am not trying to take away from the severity of the situation or try to tone down what happened. Instead of reeeaaaallly getting into the nitty gritty, I feel it stayed more on the surface.

If you are a fan of serial killers, or you like to learn about these types of stories, I HIGHLY recommend this mini season. The whole docuseries is extremely well done. The way people can remember EVERY detail that happened is crazy. But then again, if something that traumatic happened to me I know I would not be able to forget either.

This story is such a rollercoaster of a ride. It will have you glued to your TV, tablet, or phone. GLUED I tell ya!

Warning. . . Don’t watch this at night if you get scared easily. It will make you not be able to sleep. They do show crime scene photos too 😑 But the survivors in this series will honestly tell you stories that will haunt you.

Freaking Richard Ramirez! Ok I don’t even know where to begin with this guy. Even though he is a serial killer he was a very smart one. You have to give him credit for that. Usually people who kill others usually keep it personal, or they will kill someone who represent someone in their life. What was scary about Richard is the same thing that is scary about the Zodiac killer. That they killed randomly. And that is the hardest for police because they have no dots to connect.

Even though I have heard the story of Richard Ramirez many times, it still feels like the first time when I see something new one him. I get the creepy feeling all throughout my body. I am thinking this happens because my brain can’t comprehend a serial killer? Honestly I am not sure. I have heard MANY stories, but I still get creeped out like I have never heard it before.

I feel for ALL THESE survivors as well as the detective who worked on the case. This is something I know many of us will not understand. I could NOT imagine what it was like to be a detective at this time. During those times serial killers were thriving. THRIVING! All the pressure they must of felt. That’s why I like the way they did this show because I am sure they made the people feel comfortable to tell their stories again.

When the granddaughter tells her grandparents to close their doors for safety and they said no because they come from the south! Then they died! Oh my gosh my heart ripped out of my chest!! I had to pause it because I was so freaking bummed out.

The journalist got me MAAAAAAD. How rude of her to blow up the whole case just because she wanted to get a story. I know journalists have to do these things to get a scoop, but I had no idea they would blow up a case just to do that!! That lady was extremely rude to threaten that. And the thing is that I am sure she would have written about the shoe print too. She seemed like the person who would do that sort of messed up thing.

Oh duuudes. When they ALMOST had Richard I was like, AAAAAHHHHHH! What freaking luck that the day after they take off the police from sitting in the dentist place Richard comes the next day. Freaking police and their budget. YOU’RE TRYING TO CATCH A SERIAL KILLER!! IT IS OK TO SPEND EXTRA MONEY. You know what had me scratching my head though, was why the workers in the Dentist office didn’t call the police. I understand they were pushing the bank alarm button, but still. I would have called, or maybe they couldn’t 🤷‍♀️

My favorite in cases like these is when everything starts to come together. When we see all the clues click. In this case it is a shoe print. A shoe print! I COULD NOT believe how they even found what kind of shoe he was wearing. What is hard about all this is the technology back then was no bueno, but still good enough to catch people. I am just happy that what we have now makes it easier to find people.

Ok. I know I said my favorite already. BUT! My FAVORITE about this whole story is that regular people are the ones who caught Richard. I LOVE that they got him and pretty much beat him up until the police came to get him 😂 Yay people doing good!

I know Richard killed and hurt many people during his time, but thanks to Gil Carrillo, Frank Salerno, and their team for finding out who the serial killer was. Yes it wasn’t easy and the people who lost loved ones won’t get them back, but at least Richard would not be able to kill or hurt any more people.

at the end of the day, Richard was convicted of 13 counts of murder, 5 counts of attempted murder, 11 counts of sexual assault, and 14 counts of burglary 😱