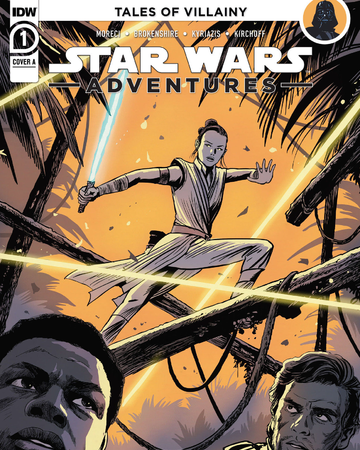 First, Poe and Finn take Rey to a remote planet to continue her Jedi training. But they’re surprised to find that the First Order’s reach extends far and wide.

Second, following the siege of Hoth, Darth Vader explores the secrets of the abandoned Rebel base

It was great to have a side story when it comes to Rey, Finn, and Poe. Don’t get me wrong, I love the main storylines we get with the movies, but I like when we get stories on what was happening in between movies or what’s happening off screen. That’s why I LOOOOOOVED Rogue One so much.

Seeing everyone together is wonderful. Especially since they have kept the humor between their friendship the same as it was in the movies. That was an aspect that I feel they got pretty spot on. Rey has her fun, light, witty banter with BB-8 and Poe and Finn still have their fun banter between each other as well.

I do appreciate that they have also kept Finn being able to feel the force. I would really like it if we got a story about him learning how to harness the force. I know it most likely won’t be in this series since in the movies we didn’t know for sure about him and the force until the very end.

The one thing that I was not fully on board was the artwork. I thought it was going to be like the cover. Artwork on the cover look great! But once you open the comic, the art work is not the same. I know sometimes the cover art will be a bit different than the actual art, but usually they are still similar. Well comics I have read have been this way. Ok, so the artwork in this one is a bit more childish looking. It is interesting looking. Now, I am no artist. So any type of artwork I am going to be a fan of, but I do wish the art were similar to the cover.

Overall, I think this is going to be a fun and light side story.

Hoth is my FAVORITE planet! MY FAVORITE! I love this one the most because this is when we are introduced to AT-AT’s. AT-AT’s are my most favorite Star Wars machine.

It was great to see that this story will focus on Vader. There is a scene, I won’t spoil in case you go read it, where Vader does an awesome Vadery thing and I was all for it. I am all for these types of actions because I love seeing more the darker side of Vader or even just seeing the pure power this guy has. We don’t really get to see how powerful he is in the movies (except for Rogue One). So any story that has Vader and he is doing something badass I am there for. I could be overexaggerating the scene 😅 but that is how much all in I am with Vader.

The artwork in this story is GREAT! It was how I wish the first part of this comic was. This artwork follows more in the line of how the movies look.

If you like side Star Wars stories like I do then I definitely say check out this comic. Even though it is just the first comic, I wish they would have separated the two stories. I am more invested in the one with Vader than I am the one with Rey, Finn, and Poe.

We are on Noaxson, a moon on the outer rim

With the help of R2-D2, Poe and Finn were able to make Rey a Jedi training obstacle course. They do this so Rey can train faster so she can join them on missions.

While going through the course Rey is on a bridge that is ready to break. . . and it does. She falls into a cavern and crashes into what looks like an underground cantina. They all recognize her and they all know that the First Order is looking for her. She fights her way out to the surface and has to go back through the obstacle course Poe and Finn made. Rey has no idea that Finn and Poe have been taken.

Finn feels that Rey might be in trouble. As soon as he feels this, two pirates ambush them and force them to go where they want them to.

We are on the planet Hoth! Vader has landed to join the fight. As Vader is walking to enter the building to try to capture Luke, Leia, and Han, he is remembering when Luke blew up the Death Star. He is remembering that he felt Luke be strong in the force. As Vader approaches the closed door he does a badass move. He sticks out his hand and BURSTS the door open.

Vader then goes into another room where Leia and Han kept Luke in a tank to recover after being out in the cold before Han came and found him trapped in a cave. When Vader see’s this we have a flashback to how Luke looked in the cold and it is compared to after the fight Anakin had with Obi-Wan. We also get a look into the similarity of Luke in the tank and Anakin in the tank as he was becoming Vader.

Han and Leia are running to get to the Falcon. Vader senses this and him and the other Snow Troopers are rushing to stop them, but of course, in the end they fail. Han, Leia, and Luke are in the Falcon leaving Hoth. Vader then calls out to his people saying that he wants the Falcon intercepted. Then he does have an inner dialogue and says to himself that if he cannot find Skywalker, then maybe Skywalker will come to him.