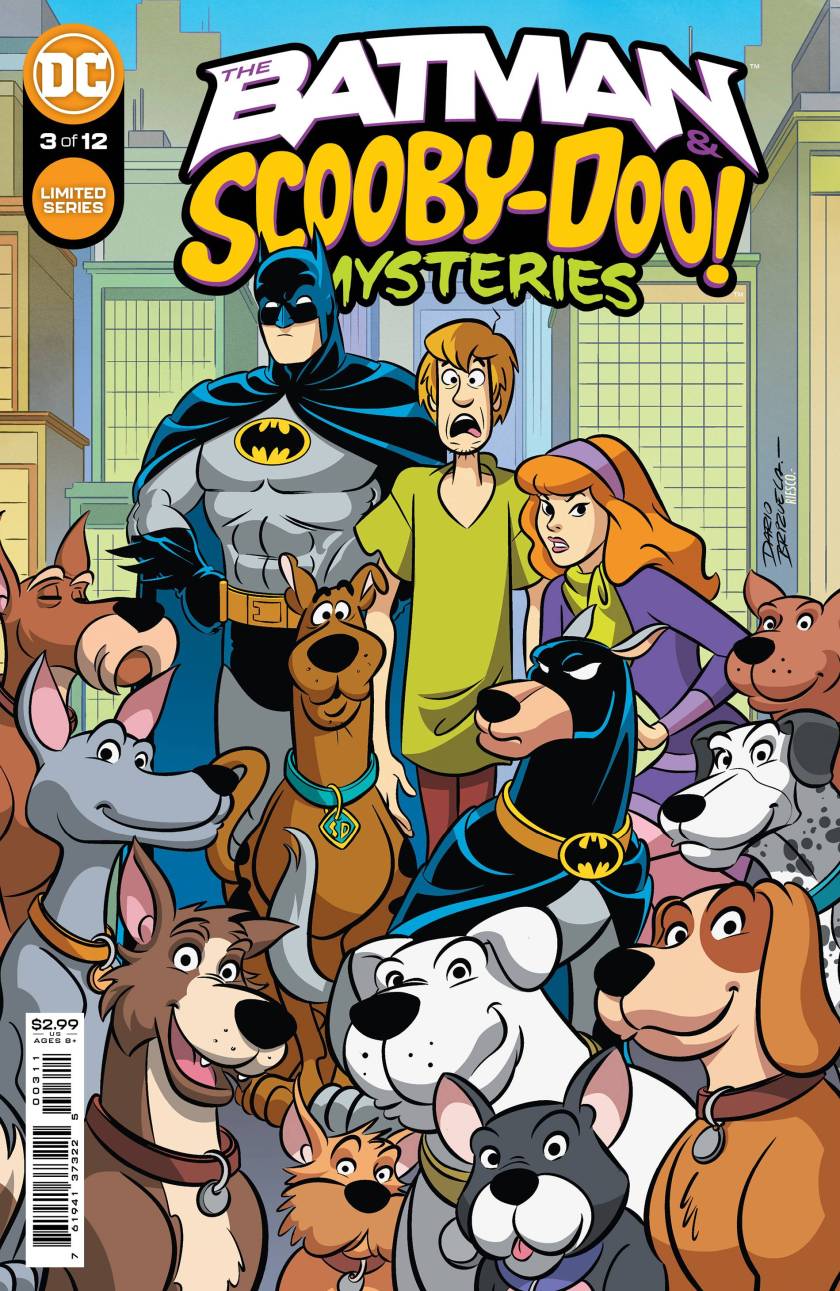 First of all, I must say. I am IN LOVE with this comic cover. I LOVE dogs! 😍 It was great to see the Dark Knights dog be a part of this adventure.

What a cute issue this was! I loved seeing Ace the Batdog. My only complaint is that this should have been all about Ace and Scooby-Doo. I like that everyone was together, but it would be cool if they were on their own adventure. Other than that this was a light hearted and fun issue. I lied. I do have another complaint. It did feel like something was missing. Some parts did kind of come together quite quickly and some scenes did move fast.

I have been in love with the artwork since the first issue. They truly capture the heart and soul of the Scooby-Doo TV show. The artwork in this comic is perfect. There really is not much else to say. You can feel that everyone involved  was a true fan of the show.

When they catch a bad guy, Daphne says she wonders who is under the mask. Then she realizes it is just a random guy. The cop arresting the bad guy asks if she was hoping for more of an iconic villain. To me this is funny because in the Scooby series their bad guys was always someone important.

Like I said, this was such a cute comic to read. Kids and adults will love this. What is great about these issues is that they don’t follow each other, so you can read them all on their own. Such a fun read.

Airport. The Baggage Bandit is at it again! Luckily Scooby and Shaggy are hungry. They bump into him and the cops arrest him. Daphne says it is just a guy. All of this paparazzi show up, but they are not there for Batman and the gang, they are there for Ace the Batdog and Scooby-Doo. Ace is going to be a judge in the dog show.

Police Headquarters. Gordon tells Daphne, Shaggy, and Batman that the dog show is bringing a whole set of crimes. They split up to go check out two different crimes. Batman pairs up with Scooby and the other group is Daphne, Ace, and Shaggy.

Financial District. Inside they find the Coin Capturer. When Ace takes off his mask it is the same guy who was the Baggage Bandit.

Dog Show. Fred and Velma return with donuts, but Ace eats them all. Scooby rubbed off on him with the whole eating thing 😂 Two-Face’s henchmen walks by Velma eating a chocolate bar and she immediately knows that he is a bad guy because no dog show worker would eat chocolate since it can kill dogs. They get him but they are still looking for Two-Face. It is now time for the final award and when Ace and Scooby head over, the judge takes Ace. But he goes no where and they unmask him.