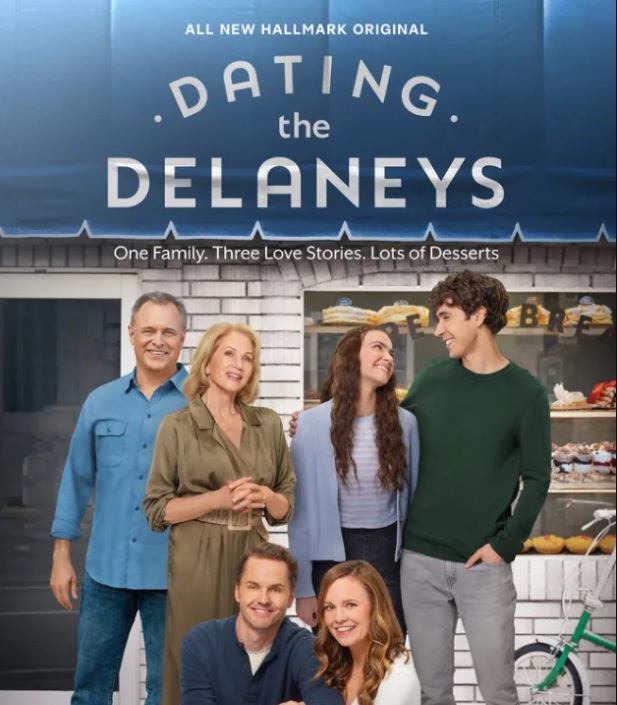 Three generations of Delaney women explore the highs and lows of modern-day dating, learning that love and romance can be found at any age…and sometimes where you least expect it.

I honestly still do not know how I feel about this movie. It was a good watch, but then the more I think about it the more I am not liking it as much. It is a real turn from the previous movie. I can see that this one had a lot of protentional, but in the end it fell a bit flat for me.

The plot of the story I was in to. Where the two single parents help each other overcome their past and have a brighter future. I just wish the story of the love interest, Michael, was a bit more flushed out. Maggie’s story was very straight forward. Divorced lady who is getting over that her ex has moved on and getting married. I almost wish that they would have made it where Michael was the focal point and Maggie was the love interest. I say this because Maggie seemed to have a good head on her shoulder and she was chillin. Michael was the one who still had to get over his wife’s death. Now that would have been a better story.

Even though the story was not 100% there, the chemistry sure was! Oh my gosh, Rachel and Paul were wonderful together! Paul is one of my favorite male Hallmark actors. He does amazingly well in every movie I have seen him in. He is so laid back and you can tell he really enjoys his work. That to him it is just who he is. He does not need to put in a lot of work because his charisma oozes off the screen. Rachel has that relaxed acting vibe as well. You could totally tell they had fun working with each other. The laughs they shared were definitely not fake. I appreciated that their friendship was real and that I could feel the chemistry between them. It made me root for the couple.

They NEED to pair these two up with each other again to give them a second shot at another movie. They work SO well together. It was a joy watching them together and they made the movie entertaining for me. I was laughing right along with them with all the corny jokes and puns.

Maggie goes on a blind date after 20 years. Her date is ignoring her. Waiter tells her to leave the date and the whole restaurant wants her to leave. The waiter makes up an excuse for her to leave.

She was legit standing in the window. Can’t believe the blind date did not see her.

We start off seeing that Maggie has two high school kids, she is a baker, and her mom is into the gardener. We also learn Maggie has an ex husband who is not always around for the kids and that he is getting married to his girlfriend.

There is a part in this scene that was super weird to me. Em, Maggies daughter, tells Maggie that she is not into breakfast. Then Maggie tells her that she printed out multiple pages showing studies that prove breakfast is beneficial to the human body. Weird.

Out on the town Maggie bumps in to Michael, the future boyfriend and her son’s best friend’s dad. Michael is a single parent as well. His wife passed away a few years ago. Both of their son’s are on the high school basketball team. After the game they all go out for pizza.

This pizza scene had me screaming. I COULD NOT believe that they ordered 1 pizza for the 5 of them. 1 pizza WOULD NOT feed 3 teenagers and 2 adults. Give me a break.

Maggie is having a hard time that her ex husband is getting married and her mom tells her to go out and date and she will set her up on a blind date. Maggie goes on the date and the guy ignores her the whole time. Just stays on his phone. While he is in the bathroom the sever and the rest of the restaurant guests tell her to leave him because he is awful.

I thought this was silly how the whole restaurant was against the dude. Don’t get me wrong. The guy was awful, but no other restaurant person would get involved. Maybe the server, but no one else. Also, it was creepy that Maggie stood in the huge window where the guy could see her and she just stood there and watched the server tell the guy Maggie left.

Maggie tells Michael about her awful date and they both agree to go on a mock date. To help each other ease back into it since they both have not dated in a long time. At work, Maggie tells her employee, Devin, that she is going on a pretend date and she tells her there is not such thing. Maggie gets a call from a hit TV Show called ”Make it, Bake it, Cake it” and they want to feature her bakery.

During this time Maggie got a call from an unknown number and Devin told her don’t answer it unless she wants to hear about renewing her cars extended warranty. This made me giggle.

For the pretend date Michael takes Maggie to go get New Orleans type food. After dinner they head to Maggie’s bakery for dessert. Maggie tells him about the TV Show and since Michael is a PR guy, he offers to help her prep for the interview. At the end of the pretend date Maggie tells Michael he is her barometer of how other dates are supposed to go.

I dislike when people fake eat on screen. Yes I know that it does not always look good. But still! Just eat. Rachel Boson took THE smallest bite of the crawfish.

During this whole time Maggie is trying to figure out her dating situation. Her daughter is having problems of her own. She likes this popular guy in school, but he ignores her after their first date together and does not talk to her anymore. She thought he was going to take her to homecoming, but ended up asking someone else out. Her lab partner who has been in like with her secretly, finally plucked up the courage to asks her to homecoming. She says yes and they are both happy.

Maggie downloads dating apps and Devin helps her to set them up. After a girl’s night out, Michael calls Maggie to help him with an ice breaker game. She agrees because she tells him that it will take her mind off of food. During the game Michael talks about his wife and how he misses her. The game is over when Maggie gets a knock on the door. Michael sent food to her house because she was hungry.

A few days after Michael takes his son and Maggie’s son out fishing. When they come back Maggie cooks a meal for the whole family. The whole time they are cracking jokes and laughing with each other. Maggie tells Michael that she has a date with a guy from an app and she is looking forward to it. After two dates with this app guy Maggie chooses not to see him anymore. He was super serious and not into kids.

How rude of Maggie to tell Michael she had a date in front of him. She knows he has been into her and she still told him anyway. Rude.

At Maggie’s bakery, she teaches Michael how to bake her famous chocolate chip cookies. They then talk about dating again Michael says he will not ‘Wink’ at anyone in the app unless he knows that person is special. The next day he ‘Winks’ at Maggie.

Maggie does nothing! She just sits on this Wink. Like COME ON! We are far into the movie where it is clearly obvious. Rude.

It is not time to shoot the interview for the famous baking show. Maggie does a great job and nails the interview.

I HATED this part the most because you could hear the hostess eating. I HATE THAT. I know hate is a strong word, but I really do dislike it when you can hear chewing and swallowing.

Maggie throws a watch party for her episode and she bakes many items and has popcorn and candy. Michael finally tells Maggie how he feels and then they kiss. He goes with her to the ex husbands wedding and they have a fun time.

This part got me all irritated. No one ate anything! Come on Hallmark! At least make it look like people at the food. What a blah ending. It should have ended with the kiss, not the wedding. I also did not like that Michael was still into his deceased wife. I know he will always love her. But the whole time he would talk about her. So they should have finished his arc where he was over her. It is not right to go into a relationship when you haven’t worked out all your feelings.