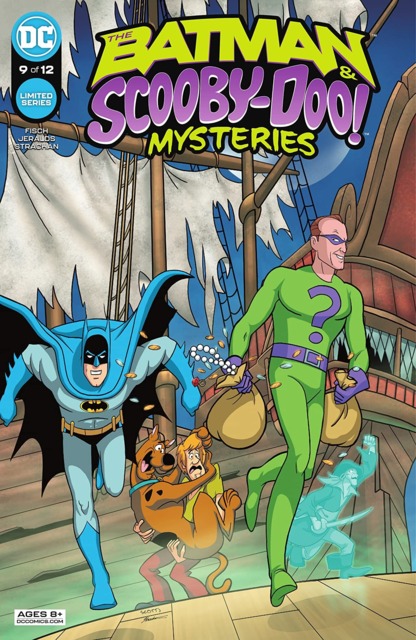 I will say, this was not my favorite out of all the Batman and Scooby-Doo crossover comics. Something just did not flow right. I can’t quite put my finger on it, but it was not as entertaining as the others have been. It also felt like the Scooby-Dooness of it all was kind of missing.

With the Riddler being in this issue I had high hopes for it. Riddler is one of my favorite villains and he just did not live up to expectations. I wanted it tp be full of riddles where the gang has to go on adventure with Batman and figure out all of the clues that Riddler left behind. I wasn’t looking for anything sinister since this series has been light hearted so far, but I wanted more adventure.

The artwork I am happy to say is still on point after all these issues. I love that they have not steered away from what makes Scooby-Doo so special. They have also stuck with the bright colors and I am here for it. Even though I am a huge fan of the artwork. I did feel there was not a lot of diversity in the panels. In previous comics there were tons to look at, but in this one it kept the same theme. I would not have mined it too much if they would have made it more of an adventure of solving the riddles.

You know, I really did enjoy seeing Riddler and Velma solving riddles together. That was honestly a fun dynamic to see because we hardly get to see anyone on her level. This was great because you could see that Velma was enjoying herself.

Overall, it was still a silly adventure that the gang goes through and has to figure out the mystery. So in that sense the comic was not bad. But it still left me unsatisfied. AND, I was mislead as well because the cover of this comic has Batman and he was not even in it.

Riddler tells them all that he has discovered all of the clues. The other two people go on their own to search while the Riddler teams up with the Scooby gang. While searching the keep running into the ghost of the pirate. Daphne soon figures out that it is a projection from the other teams drone.

When they figure this out they realize the Riddle is no where to be found. They all run back to the pirate ship and find that the Riddler made up the clue and he was searching the ship for the treasure. Velma figures out where the treasure was hidden. Batman pops up at this time and put Ridder in handcuffs on the him because he committed many crimes in Gotham.