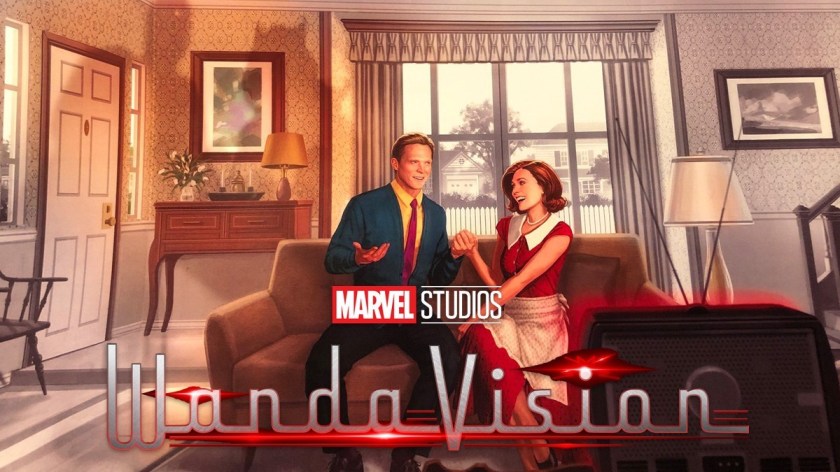 After watching the first two episodes I have now sat down to digest everything about them. 😅

Not only will I just tell you the Easter Eggs I found, but I will also tell you the meaning behind them as well.

I truly do think Wanda is making this reality she is in herself. So I think the sign saying “HOME: IT’S WHERE YOU MAKE IT” fits perfectly with my theory.

My theory is Wanda is creating this whole reality herself because she cannot cope with the loss of Vision. I also think people are trying to help Wanda, but when they get too close they get sucked into her reality making them forget everything about themselves.

This scene to me is very similar to I Love Lucy. In the 50s, TV shows would not allow a couple in the same bed.

Later in the 70s is when TV allowed a couple to sleep in the same bed. Right after this scene Wanda pushes the two beds together. This to me signals we have moved to the 70s in WandaVision.

In episode 2 the opening of WandaVision is visually the same as Bewitched.

This makes sense to me because Wanda and Samantha are both witches.

Their house number has a significance to it. In the original Wanda and Vision comics it all took place on Earth-2800.

The whole MCU we have been given is on main earth, Earth-616.

Even though she says her name is Geraldine, she is actually Monica Rambeau. Monica is the daughter of Maria Rambeau. Maria is best friends with Carol Danvers, who is Captain Marvel. In the comics, Monica also takes the name of Captain Marvel. So Monica not remembering her own name also plays into my theory that Wanda is doing all this.

Day With a Heart

To me I believe they have this particular number stand out because there are 23 Marvel films. I don’t think this is too much of a stretch because we all know that Marvel does not do anything by accident.

Agatha is a powerful witch who becomes Wanda’s mentor and that just scratches the surface. Wanda and Agatha have a crazy history. I will tell you quick bullet points on the history of Agatha.

Bova in the comics is an evolved cow who was with Wanda’s mom when she gave birth to her and her brother Pietro. Bova was created by a man named Herbert Edward Wyndham aka High Evolutionary

The sign next to Bova Milk, Auntie A’s could possible be referring to Agatha Harkness. Agatha in the comics is a mentor to Wanda and Wanda’s children does call her auntie.

The label on the wine bottle Wanda is pouring says “Masion Du Mepris”. That translates to “House of Contempt”. What to note here is how big they made “Mepris”. The big “M” could be referencing “House of M” from the comics.

Now. House of M is a pretty crazy thing to get into. So like how I did for Agatha I will do here. I will put bullet points highlighting the main items.

The use of these names is a nod to the comics because in the comics Vision and Wanda’s neighbor were magicians. They went by the names of Illusion and Glamour. Their real names were Ilya and Glynis Zarkov.

Grim Reaper’s helmet is a nod to Tim King’s Vision where Vision tries to live a normal life. In this comic Vision fights the Grim Reaper.

SWORD in the comics stands for Sentient Worlds Observation and Response Department. Their job is to detect threats in space. So they do their best to respond to any extraterrestrial problems before they hit earth. They mainly appear in the X-Men comics and they work closely with SHEILD.

I feel they will be the “Bad Guys” in this series because they would count Vision as a threat. Vision could be viewed as a sentinel.

This is significant because this is the first time we see something in color. I feel this is the outside world trying to break into Wanda’s reality. I think this helicopter tried to breakthrough, but since Wanda is so powerful that it “crashed” and she made it into a toy.

This guy coming through could mean that he found a way to infiltrate Wanda’s reality. As a resort of this Wanda has learned to turn back time.

William and Thomas are the names of their children in the comics. In the comics William is knows as Wiccan and Thomas is known as Speed.

Wiccan has similar powers to Wanda’s and Speed has super human strength and can run faster than the speed of sound.