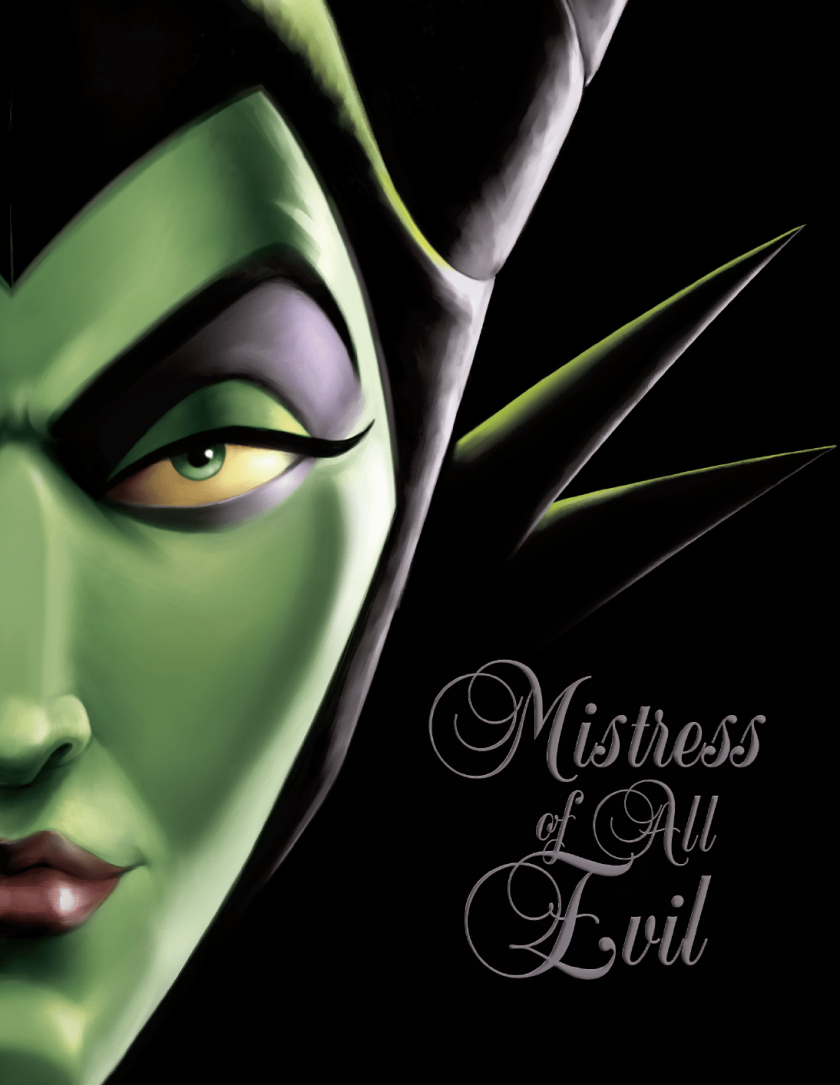 The story of Maleficent has been told many times. Always about the lovely maiden. What of the Dark Fairy, Maleficent? Why does she curse the innocent princess? This is a tale of love and betrayal, of magic and reveries. It is a tale of the Mistress of all evil.

I am in LOVE with Valentino’s books. They are so creative and such a fun read!  Especially this book. The way Serena writes is wonderful, she draws you in with all the mystery to where it is almost like watching a TV show. I know we have the movie Maleficent to show us her past, but this books shows it in an extremely different way! I still think it is great that all of these books connect to each other. If you are going to start reading this book you MUST start with book one. If you don’t then you will be lost when it comes to certain characters.

This was a very interesting origin story. There were some references to the film, this story took place in areas we have seen before, and it did not entirely revolve a lot around Aurora. I loved the twist this book has when it comes to who Aurora is to Maleficent. It was also great to see all the fairies we have run into are all connected. After reading this book I have a totally different view on the Fairy Godmother, Merryweather, Flora, and Fauna. Check out the book at you will see why. . .

Overall this was a wonderful read and it was great seeing Serena’s point of view of what happened with Maleficent. Like I said before, even though we have gotten many Maleficent stories it was great to get a fresh perspective. Maleficent still has a dark elegance to her and her back story in this one is more tragic than I have read. This one by far is my favorite Villain book.

The ONLY negative thing I have to say about this book is that I wish we got more explanation of who Maleficent’s parents are.

I love that all these books have the Odd Sisters in common to connect them all together. We start the book off pretty much right where “Poor Unfortunate Souls” left off. Maleficent talks about how it is the Odd Sisters fault for believing in Ursula when she told them not to. Now the Odd Sisters are stuck in a dream world.

After Maleficent has Aurora prick her finger on the spindle, she makes her way to Morningstar Castle. When she gets closer we learn that Ursula left a lot of destruction after she died. We also learn that the Evil Queen (Grimhilde) is stuck in the same mirror her father was. The mirror is still in Snow White’s castle. So Grimhilde’s torture for eternity is to watch over Snow through the magic mirror.

While Maleficent is on her way, we now turn to Circe and how she is handling everything that happened with her, her sisters, and Ursula. Circe is still mad about what happened. And rightfully so. Ursula cast a very intense spell that would have killed Circe, but her sisters came to her rescue. So now the Odd Sisters are trapped in their own dream world. During this time Circe has been spending all of her energy cleaning up around Morningstar Castle, hating Ursula, hating Triton, and hating her sisters for meddling in people’s business. To honor Ursula, she gave her a proper funeral. Even all of Triton’s daughters came to the funeral to pay their respects because they knew it wasn’t all Ursula’s fault as to why she became so cold hearted.

I truly love that we get to see the inside of Aurora’s mind when the sleeping curse is cast on her. Even in the original movie and the live action versions, I always wondered what Aurora could see. Because even though you are sleeping, your brain is still active. Now I don’t have to wonder anymore. Valentino does an amazing job describing the dream world. She says it is a dark place full of mirrors, and if someone can harness the power of the dream world they would be able to use the mirrors and see into the outside world. With Aurora being a “hero”, she is able to harness these powers and use the mirrors to look at anything she wants. Sadly the Odd Sisters are also in this dream world and the find Aurora.

The back story Valentino gives us on Maleficent is great! We hardly get to hear about her when she was growing up. Valentino tells us that Maleficent was born in the fairy land in a crows tree. No fairy wanted to talk to her because she was scary looking. They named her Maleficent because they got the name form Saturn and Mars. Saturn because of it’s unfavorable influence and mars because mars is a malicious god known to cause destruction and war. When Maleficent is four, Nanny (Tulips Nanny) finds her and brings her home. Nanny loves Maleficent as if she were her own child.

We now head back to Snow White’s castle. It is pretty cool to for us to get an older Snow. An older Snow who notices she has lines on her face that are aging her and that she has kids who are at their own castles. Pretty weird too to see Snow actually talk to her mom, Grimhilde, in the magic mirror. You would think Snow would be angry at her, but no. She forgave her.

Nanny taught Maleficent magic! It is crazy to read about how Maleficent learned her magic. She went to Fairy school! Reminds me of Hogwarts 😂 But man, learning that Fauna and Merryweather both teased Maleficent all the time really makes me dislike them! Like A LOT! How dare they pretend to be all sweet like when they called Maleficent names and told her to hide her horns. THE HYPOCRACY!! What I did love, was finding out Nanny, and Cinderella’s Fairy Godmother, are sisters!

This book is reeaaallly making me not like the “good guys”. Not only are Fauna, Flora, and Merryweather mean, but so it the Fairy Godmother! Like what the actual heck?! I am so bothered by this it truly makes me look at all of them in a different light. Makes me dislike Maleficent less because it is not all her fault why she is evil. Just like Ursula. People in their lives made them these angry beings.

At Snow White’s castle, Snow and her mother have found out that the book her mother got from the Odd Sister’s might be spellbound. This book that Grimhilde (Snow’s mom) was given had the story of Maleficent in there before it even happened, and it now has the story of what happened to her and Snow. The story of Grimhilde and Snow was not in the book when it was given to Grimhilde. So Snow and Grimhilde fear that the Odd Sister’s spellbound the book. Which means whatever they write in the book will come true. With this knowledge Snow sends a letter over to Nanny and Circe at Morningstar Castle.

During the time Nanny and Circe are trying to find where the Odd Sisters are, the King of the Fairies, Oberon (who is a big tree), has come to visit with Princess Tulip. Oberon is a powerful magic fairy who went to sleep to regain his strength. He has come back because Tulip has always had an interest in Oberon. Oberon has come back from his slumber to get rid of Maleficent.

We get a flashback to when Maleficent is taking her fairy exams. Cinderella’s Fairy Godmother creates scenarios for the fairy’s to see if they are ready to pass their exams and get a person to look over. In this scenario Maleficent is given Snow White. Which is crazy cool! This is the time the Evil Queen is going mad with rage and wanting Snow dead. After her exam we learn how evil the Fairy Godmother is, as well as Merryweather, Flora, and Fauna. I truly feel they are the reason why Maleficent turned out the way she did. The only fairy who was nice to Maleficent was the Blue Fairy. . . Trying to think which one that one is. . . I’ll give you a hint. . . Pinocchio.

After her exams we flashforward and now Nanny and Maleficent have reunited! This is where everything gets interesting. Circe we find out is not a sister, but the daughter of the Odd Sisters. And. AND! We learn that the Odd Sisters CREATED Aurora for Maleficent. SOOOO Maleficent is Aurora’s mom! HER MOM!