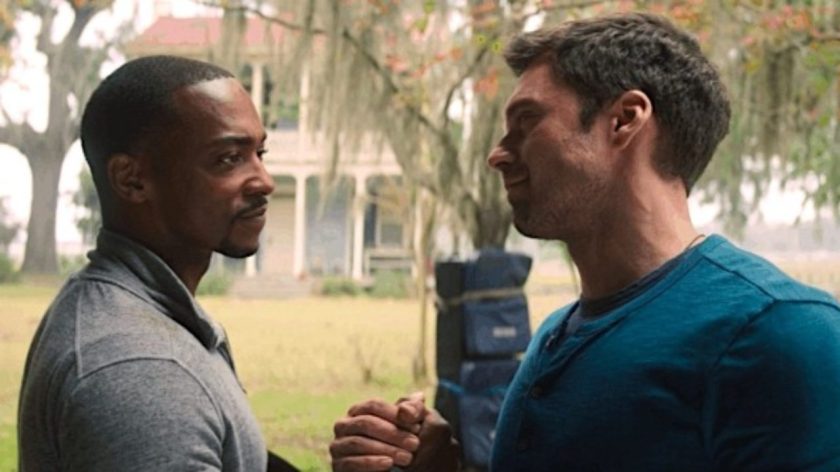 Only one more episode left! 😭 This was a pretty emotional episode for every character.

He is finally realizing what he needs to do. I am glad that he went back to go see Bradley and he went to see his sister too. With both of their views it really was what he needed to have the confidence to become Captain America. It was awesome seeing him put in the time and work to get in shape to be the Captain America he wants to be. We know he is getting help from Wakanda because they made his a suit. Well I am thinking it is a suit that Bucky asked for. What else could it be and why would they make us wait to see what is in the case if it is not a suit. Because even in the comics Sam’s suit does come from Wakanda.

I know when Sam was talking to Bucky, Sam said Steve is gone. But I don’t think Steve is dead dead. I think He means gone in the sense that he is not Captain America anymore. This could be just being hopeful. But I really don’t think he is actually dead.

That was super nice of Bucky to ask Ayo to make Sam a new suit. EVEN though we did not get to see it. I cannot wait to see it this Friday. As soon as Bucky asked for Ayo to do a favor, I knew this would be when Sam and Bucky start to come together. But you know, it was great to see Bucky hold the shield towards the end of the episode when he was training with Sam. At the end of the day I do hope that Bucky will make amends with everyone on his list and that he will go back to Wakanda to be the White Wolf again.

Also, that fight they had with Walker was legit!

A storm is coming. Their actions that they did when there was a vote happening was right on the money with events that happened in real life. Carly is going down a path she will not be able to come back from.

I knew she was shady! BUT, she is acting like a head honcho. So either she is Power Broker, or she is his right hand man. Er. Woman. If she truly is working for Power Broker I hope it is as a double agent kind of thing. Not holding my breath on that one though. I hope she does come back to the good side but I would understand if she stayed bad. Especially after since everyone forgot about her and didn’t pardon her.

This guy man. This guy is spiraling and he is spiraling fast. He is bad news. I wonder if we will see him in action with the Power Broker in this last episode. Or if we won’t see Walker until after this show is over. I am thinking we will see him in the last episode. I am still not sure what this show is leading up to. Like in WandaVision we all knew it was leading to Doctor Strange, but like I said. I do not know where this show is heading. Either way, Walker is gonna be bad news.

I will be honest. When he was fighting Sam and Bucky I did a HUGE eyeroll. I did the eyeroll when he said, “I am Captain America”. I did that because it is a call back to when Iron Man said, “I am Iron Man”.

On a side note, was it just me, or did Lamar’s sister DID NOT believe a word Walker was saying when he was talking about his death. She TOTALLY knew he was lying. I don’t know if that was intentional or not. But her acting made it seem like she was not having what Walker was saying. Also, we truly now know that Lamar was LEGIT Walker’s conscience.

Man. We NEED a Dora Milaje show! And yes NEED. It would be a total badass show and I am all for that.

Julia Louis-Dreyfus was pretty legit in this show. All I know her is from comedies. So to see her in a serious role. Well. Sort of serious. She did make witty remarks. Anyway. I did like seeing her in this kind of role. I really enjoyed her blue hair too. I believe that her character totally works for Power Broker. So it makes sense why she wants to keep an eye out for Jon. Power Broker will definitely want to use Jon to his advantage.

So her character name is Contessa Valentina Allegra de Fontaine. In the comics she is dating Nick Fury and she is a leader of SHIELD. She also became a HYDRA agent. In the Secret Invasion it turns out that Contessa was a Skrull who wanted to find out all of Nick Fury’s secrets. Fury became suspicious and that is how he learned about the Secret Skrull Invasion.

You know. In the comics he does become the new Falcon. And Sam did leave him the wings after the fight with Walker. It would be awesome to see Torres fix the wings and use them in this last episode.

Ok. So the Dora said they are taking Zemo to the Raft and NOT back to Wakanda. The Raft is a high security prison that was talked about in Captain America Civil War. This is significant that he is going to the Raft because this is where he could create the Thunderbolts. Zemo creates the Thunderbolts from reformed super criminals.

If you missed it like I did the first time around, the mid credit scene starts at 54.20

Walker is making and completes his own Captain America shield. But the thing with his is that it is NOT Vibranium. So it will not stand up to the real Shield.