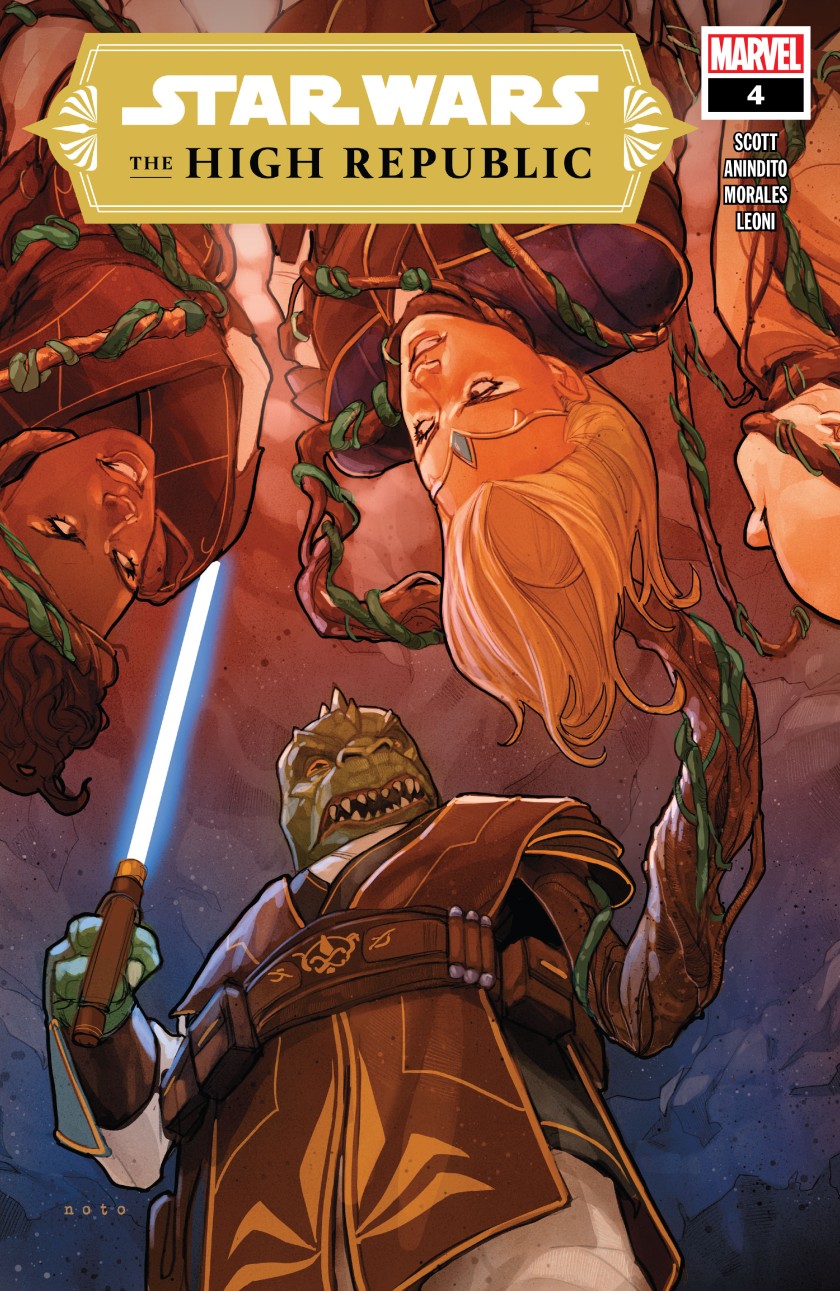 Ok. I will be real. This one was not as, OH MY GOODNESS, as the other issues, but it was still good!

Like I have said before, Scott’s writing is amazing. He really knows how to keep me at the edge of my seat. Whenever I find myself at the end of the issue I am always saying, “nooooooo!”. I hate waiting for the next issue to come. I LOVE the comics, but I like them so much I just want to read them all at once.

This particular issue did movie a bit slowly, but I understand that it was necessary. With new characters being introduced at some point we do need background story on them. Scott takes his time to flush this story out so we as the ready fully understand everyone’s point of view.

I have always liked that even though the Jedi say they should not have connections, they all pretty much do. They are all deeply rooted in friendship. This is why I am enjoying the inner monologue of Keeve. She has a really deep connection with Sskeer. In this issue we get a flashback with Sskeer training Keeve and it is a wonderful few panels. That’s what makes the present so intense. Since it is beautifully written, you can feel the tension between Sskeer and Keeve. And you can feel the pain Sskeer is going through. On another note. We get a glimpse into what Starlight Beacon can do. Like I said, Scott’s writing is so intriguing and I am excited for the next issue.

We are four issues in and the artwork is still brilliant. Every. Single. Panel is gorgeous and life is brought into them. It makes everything pop right off the page. Even the contrast between the Drengir and Starlight Beacon is well done. You can truly tell the light side from the dark. Anindito, Morales, and Leoni have really married all their styles together and have truly created their own Star Wars style. Like I said. Every section of these panels are perfection.

Even though this issue was a little slow, it was still packed with intensity and heavily character driven. Normally when things focus heavy on character development it can get boring. But Scott really knows how to make this part of writing interesting and full of twists.

A derelict Hutt ship. A Nihil incursion. Missing colonists. The Starlight Jedi’s hunt for answers leads them into a deadly trap set by the monstrous Drengir. Cut off from aid, Jedi Keeve Trennis, Marshal Avar Kriss and Jedi Ceret must face this terrifying threat alone. But the Drengir controls Jedi Master Sskeer. The first target for the Drengir’s dark harvest? His former apprentice, Keeve. . .

Kirima. The Mid Rim. Six years ago. We see Sskeer training Keeve. Keeve remembers Sskeer being her rock and universe. He was always there to catch her when she fell. Keeve wonders where it all went wrong.

Sedri Minor. The Galactic Frontier. Now. Sskeer is still possessed by the nature creature. I will say. Sskeer’s wood twig arm thing is actually pretty cool. Sskeer starts to tell us the history of hoe the Drengir came to be. The Drengir spread across the galaxy feasting on flesh and bones. One day they had people who did that with them. Two Sith Force users. They then turned on the Drengir, but the Drengir took over their bodies.

Back on Starlight Beacon they are taking a look at to what happened with the Hutt. They find out that the Hutt body is fully infected with roots, but they are not sure what these roots are. All of a sudden the roots BURST out of the Hutt’s body.

Back with the Drengir, Kreeve is trying everything she can to break Sskeer out of the hold the Drengir have on him. At this time the roots start to go inside everyone’s nose and throat. With Kreeve’s words, Sskeer was able to break out of the Drengir hold. Sskeer then released everyone. When they finally get back to the village, Avar Kriss and Sskeer want to have a word with Kal Sulman because he lied to them about the roots. He knew they were there the whole time.

It closes with the Hutt cartel heading towards the Jedi.