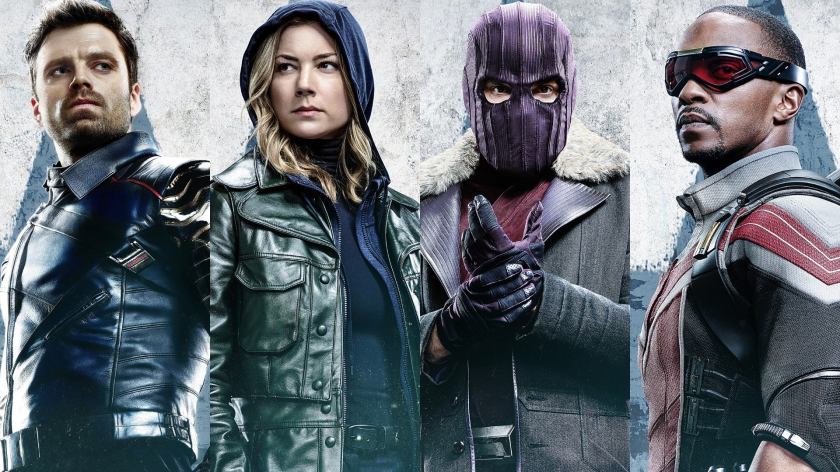 His story arc and character development I was all in! Throughout the movies we got glimpses of who Sam is, but in this show I am happy that we were able to get more of Sam’s story. Like I said before, I will be honest, Sam was not a favorite of mine. But after this show I am fully all in on Anthony Mackie. I was a fan of Anthony Mackie on Altered Carbon on Netflix, but I was wishy washy as him as Falcon. I have been fully won over and I am all in on his character.

When Sam was fighting Carly it honestly felt like a call back to Steve Rogers. They have both said “I won’t fight you”. Steve said it to Bucky and Sam said it to Carly.

And the speech Sam gave at the end was also awesome. I am glad they wrote it for Sam and not someone else. It was more impactful coming from him.

The ending was awesome when that one person said, “It’s Falcon!”, then the other guy goes, “No. That’s Captain America”. LOVE IT!

I LOVE that Marvel did the exact same suit as we see in the comics!!

I really thought the Dora Milaje were mad at Bucky for what he did with Zemo, but after seeing Sam’s new suit, they must not be AS mad as I thought. Not only did they make Sam a suit, but they remade him the wings AND redwing.

I was so sad when Bucky finally told the little Asian man that he killed his son. I was hoping that he would have forgiven Bucky, but I understand why he could not. I just wanted them to remain friends because I LOVED their friendship even though I know why it was formed in the beginning. But at the end of the day I am glad that his story of his past is pretty much done. He can start to move forward with his life now.

The way they ended this show was so great. I love that Sam and Bucky are now close friends. Seeing Bucky at the family feast was beautiful. Also, I saw Sam’s sister looking at Bucky again. I know we will never see anything. But it would be nice if they ended up together 😊

🟢 Carly and The Flag Smashers 🟢

Even though she has been killed, I truly believe that her message will not stop with her. She touched so many lives throughout the world. She gathered MANY followers. So I wonder what will happen with all of her followers. Maybe with Sam’s speech they all stopped being a Flag Smasher? I have no idea and I find it hard to believe that all of them were ok with what happened. So we will see if they pop up in other movies or shows.

I LOVE the way they portrayed his character on this show! It was WAAAAAYY better than it was in the comics. In the comics Isaiah is brain dead. So here they gave him the respect that he deserves. I legit almost cried when at the end Sam shows Isaiah that he has his own wing in the Captain America section. Sam was able to get ALL the files and videos on Isaiah declassified. SO GOOD!

I KNEW IT!!!!! I KNEW SHE WAS POWER BROKER! Ok. I kept saying she was either Power Broker OR she was his right hand man. At the end when the Government pardoned Sharon I knew it was going to be bad, but you know. I am not mad at Sharon for her wanting to sell secrets. She was FORGOTTEN! NO ONE came back for her to save her or to pardon her. They totally used her then left her. So for her to turn on everyone I am not mad about it.

Also, Sharon totally killed Carly because she knew that she was the Power Broker.

You know. . . I just thought of it. Can Sharon be a Skrull??? Hmmmmm. This would be pretty dope if she is. Secret Invasion is coming. . . If it turns out she is a Skrull coll, if she isn’t that is still cool too.

After this episode I do not hate Jon as much as I did.

I was really hoping we would see him as Falcon. Not to see him out there with Sam and Bucky. I am not saying that because it would take away from EVERYTHING Marvel is trying to accomplish. When the camera pans over to where Torres is, it would have been cool to either see him working on the wings Sam gave him or to see the wings in the background.

HE IS GOOD! He and his butler are freaking good! When that van of Flag Smashers blew up and we saw Zemo’s butler press the button. Wowza.