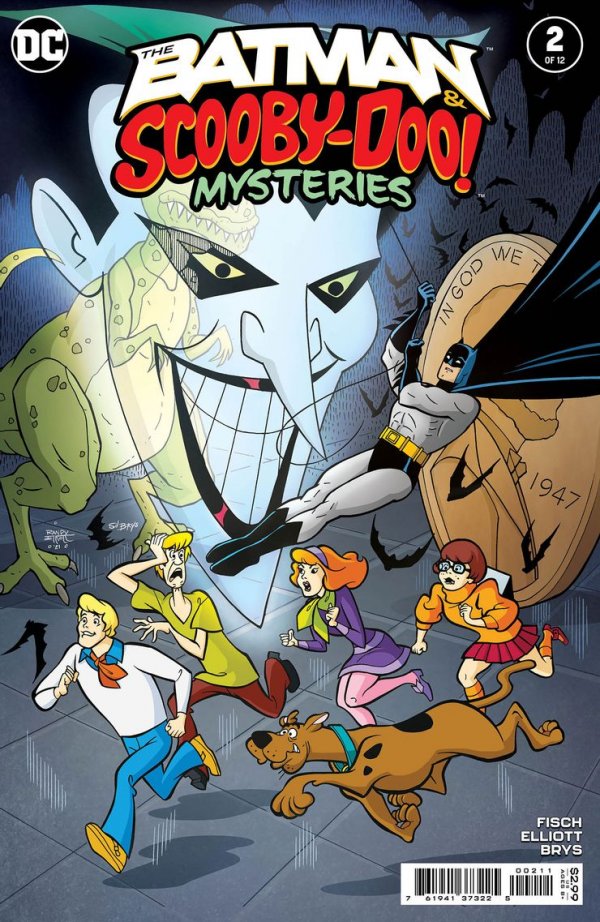 Another great issue. I love that they have made this comic series. The TV shows are great! So it is awesome to see this go from TV to paper, and with Batman! So brilliant!

I thoroughly enjoyed this issue. Although, it was not as a great of story as the first issue, but it was still enjoyable. Even though the story was not as strong, the humor was still on point. Fisch really captured the spirit of Batman and the Scooby gang. I will admit that this story did need a little more oomph to it and the ending was very abrupt and a little lackluster. I know this is most likely geared more towards kids, but adults will pick this up as well because this is what they grew up with.

I am still IN LOVE with the artwork. It is EXACTLY like watching the original Scooby Doo cartoon. The way they make the art look completely cartoonish is amazing. Even the way they captured the animated Batman series and turned it into a Scooby cartoon is fantastic. I also like the letters and bubbles. Usually bubbles and letters are pretty blah and similar to all other comics. But this one truly does stand out on its own.

While they are trying to solve the case, Fred says that it could be a crooked real estate developer 🤣

This one was so much fin to read. Like I have said before, it really feels like a Saturday morning watching cartoons. I can’t wait to read the other issues.

The gang and Batman and Robin are at a carnival trying to capture the Joker and his goons. They finally do and the Police take them in. As always, Batman takes a souvenir to take to his Batcave. This time he takes the gang with him.

On their way to the Batcave, the gang is blindfolded so they cant see where the cave is. He takes them here to show them his appreciation. Shaggy and Scooby are running around and then a ghost appears. The ghost chases them all and tells them to leave.

Batman and Velma figure out that the souvenir they brought back has a GPS tracker in it. Batman says it was his fault because he usually scans the items, but didn’t this time. This is worrisome because since the ghost is fake, it means that someone is behind it. So they will know where the Batcave is and find out their identities.

The Joker and his goons escape the Police and they are headed over to the Batcave and following the GPS tracker. Joker new that Batman would take the souvenir back to his cave. This way he can finally figure out who Batman is.

Luckily Batman and the gang caught this on time so they tricked Joker and sent him to a random cave where they caught him again.