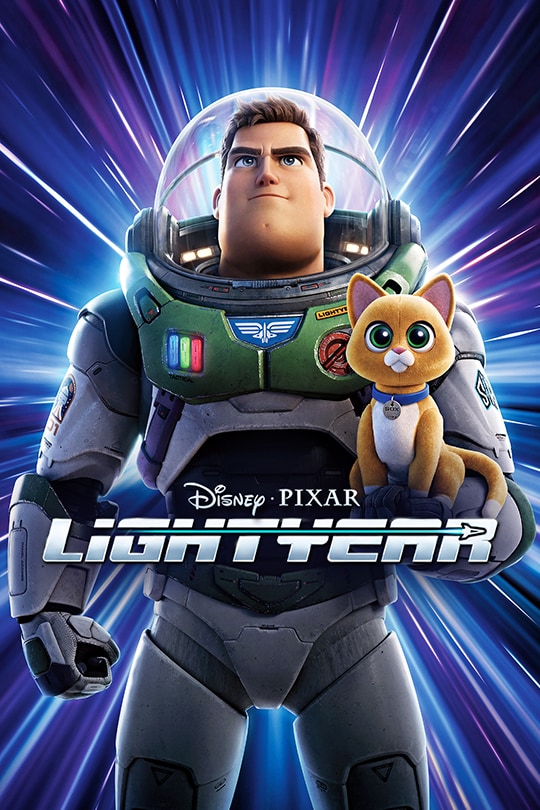 Buzz Lightyear travels through space and time and teams up with some rookies to face a familiar foe.

All the actors in this is fantastic. They all do an amazing job at bringing these characters to life. Chris Evans had big shoes to fill coming in to this role as Buzz. Overall I think he did a great job. This was such a fun filled space adventure movie. Fun for the whole family for sure. It as also a visually stunning movie.

Just like many Pixar and Disney movies, the lead character tends to have an animal companion. This movie is no different. We get Sox, and O.M.G Sox is fantastic! I love that little emotional support cat so much. He is full of surprises and it was entertaining to see them all throughout the movie. Sox FOR SURE steals every scene.

The actors in this are on point! Top notch acting for sure. I like that Chris Evans gave his own version of Buzz. Yes, you can hear that he tries to match Tim Allen a little bit, but he did throw in his own flavor and I enjoyed that. You can really feel that everyone involves enjoyed doing this movie. I’m sure it was great to see each of them in the booth doing their thing.

A few things that I will be picky about is that I felt a bit underwhelmed about (1) because this movie did take place on just one plant. Normally I would not mind, but there was nothing too special about it. Maybe if they make another one we will go somewhere else (2) I felt like The Evil Emperor Zurg did not live up to his name (3) I am not sure if I can see why Andy wanted the Buzz toy so bad.

Overall, Lightyear is a fun and entertaining movie to watch. I hope they make more so they can expand this world a bit more. And maybe they will incorporate the Buzz Lightyear TV show. For those who don’t remember. . . It was called Buzz Lightyear of Star Command.

This movie is the origin story of Buzz Lightyear. This is the movie that Andy saw that lead his Mom buying him a Buzz Lightyear toy for his birthday.

Buzz and his team are on a Space Ranger mission. On this mission with him is his best friend Alisha Hawthorne. While they get ready they touch the tip of their fingers and say “To Infinity and Beyond”. The mission starts to go sideways and Buzz takes action into his own hands. Because of this Buzz gets in over his head and crashes their ship on the hostile planet. On this planet there are vines and bugs that try to kill them. They are able to escape and create a safe space for them to live. In order to get off this planet Buzz tries to discover an energy source that will help them get off the planet.

Every time Buzz tries a new energy source to reach hyper speed it skips 4 years. Everyone on the planet gets older, but Buzz stays the same age. When Buzz is successful, it costed him 22 years total. When he would try again he would see that Hawthorne went up in ranks, the town they are living in is growing, Hawthorne marries her wife, Hawthorne has a baby, and then finally Hawthorne passes away. Hawthorne, before she passed, left Buzz a heartfelt message. She also leaves him an emotional support robot cat named Sox.

I love that she is Black and Gay. This truly needs to be more normalized in live action as well as animation. For people to make such a big deal about this was so ridiculous to me because it was legit like 2 seconds while a door was closing. Hopefully in the future these scenes will be more out front and not hidden. I do love too that when Hawthorne said she fell in love, Buzz automatically said “Who is she?”. I love that so much because it was normal. They did not make it a big deal because that just how the world is and it is accepted.

This message Hawthorne left Buzz made me almost cry. Pixar gave it that Pixar charm. It was sad to see that Buzz totally missed out on his friends life because he was so focused on getting off the planet. He was also stubborn and would not listen to reason. You could see that people were creating lives on this planet and enjoying themselves.

Buzz takes the time to see what has happened to this planet and he sees that it is over run with robots who are under the control of Zurg. Buzz wants to get everyone off the planet with his energy source, but the new Commander will have none of it. He wants to stay on the planet because every one there has built their life in this place. Izzy, Hawthorne’s daughter, and her amateur team agree to help out Buzz with his mission.

We see that Zurg and his robot goons are trying to take over the planet.

I was really disappointed that Zurg turned out to be Buzz and not Buzz’s Dad. In Toy Story 2 Zurg tells Buzz that he is his Dad. It was a parody of when Darth Vader tells Luke he is his father.